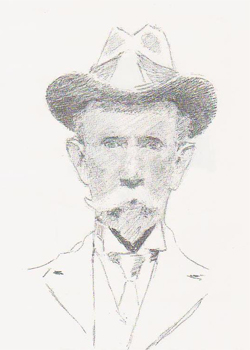 Edouard Van Goethem was born the son of a Belgian father and Irish mother in Brussels. His parents set up an orphanage for Protestant children and his father also ran the family sugar refinery. There were five children in the family and the eldest son eventually took over the running of the refinery. Edouard was not interested in business. He cared only for music and art and was educated at the Lycee and Conservatoire.

He suffered from ill health throughout his life and went to Algiers for the climate. There he met Lucy Lafone who was also on a visit. They were married from her parents’ house in Dulwich but lived in Brussels. Their four children were born there and Edouard devoted his life to painting.

When the refinery failed, the family moved to England and settled in Parkstone which overlooks Poole harbour. It is likely that they lived under the generosity of Lucy’s father as Edouard never took a job and did not sell his paintings. He preferred painting in watercolour and most of his pictures of children were done at Parkstone.

He was a very conservative and self-disciplined man, maybe because of his poor health. He took two walks a day of exactly the same duration, drank only hot water and ate sparingly. His wife ran the house and dealt with all practical matters including money.

Edouard’s only son died while training to be a pilot in 1917 and Edouard himself died after a long illness in 1924 and was buried next to his son in Parkstone cemetery.

If you have any questions or queries, please don't hesitate to get in touch via the details on our contact page. Contact Us